I've been remiss in updating my bibliography here on the site, but I wanted readers to know that I have a new book out.  SEEK AND YE SHALL FIND is now available as a paperback from Amazon or an ebook from your favorite ebook vendor. 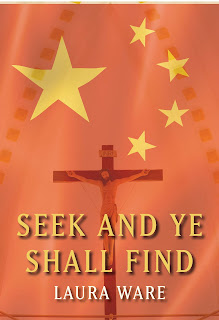 "Two years ago, Gary Benson's world as he knew it ended.
His daughter Sarah died in a car accident while she was
arguing with Gary about religion. The tragedy left Gary filled
with guilt and estranged not only from God, but also his
Chinese wife and their remaining daughter, Sarah's twin sister Melanie.
When Melanie, arrested and accused of being a Chinese
National Christian while visiting family in China, disappears,
Gary must marshal all of his contacts as an ex-Special Forces
member and senior CIA analyst to try to save her.
He blamed God for one daughter’s death. Can he find a
way to forgive God—and himself—to save the other in time?"

I hope you check it out!

Posted by Laura Ware at 4:08 PM No comments:

In an earlier post, I may have written about the concept of "life rolls."  These are events that happen in your life that can temporarily derail you.  They don't have to be bad - but they are often major.

On August 24th I was struck with not one but two major life rolls.  My dear mother-in-law, whom I had been taking care of for some time, passed away.

Within the hour we received news that our dog, Barney, had to be put to sleep.

One of these is bad.  Together?  I wept in someone's arms, saying I couldn't cope with it.  That I wasn't strong enough to deal with the weight of grief.

I gave myself permission to drop everything, including the writing, for a time. The time was brief for some things (I only took one week off of my column that appears on Saturdays, but it was not due to pressure - I could have taken longer - but I wanted to see if I could still do it).

I worried that grief had broken writer brain.  I had a Romance Writing Workshop I was scheduled to go to in less than a month, and I wondered if I could still write decent fiction.  Perhaps it seems strange that I would worry about that, but I had a lot of trouble with writing after my father-in-law died.

I decided to go ahead and go to the workshop after the people giving it encouraged me to come.  There was a story assignment.  I wrote something for it, only getting stuck when it came to a title - and usually titles are the first thing I come up with.  But I put together a tale that had a beginning, middle, and end.

I went to the workshop.  I did most of the exercises assigned and wrote two more stories, as well as two novel sketches.  And to my relief, I discovered writing brain was not broken.  I could still produce good fiction.

And I only had one meltdown and one choked-up moment.  So that was a win too.

Now?  As one person put it, I'm finding my sea legs.  I am no longer a caregiver, so looking to fill that empty space in my life is what I'm working on.  It's not a straight line - grief appears to take weird turns and detours - and I'm still trying to find my way.

But I WILL find it.

Next month I plan to tackle Nanowrimo, and hope to thrash out 50,000 words.  It feels daunting. But maybe, just maybe, I can do it.

If you're a praying person, pray for me as I walk this road.  If you don't pray, I'll take good thoughts.  If you've read this far, thank you.
Posted by Laura Ware at 4:52 PM No comments: 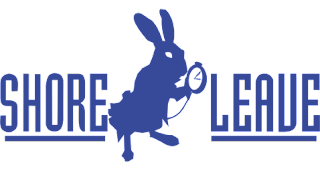 Once again, I will be traveling to Hunt Valley, MD to participate in Shore Leave 41.  Shore Leave is at the Delta Hotels Baltimore in Hunt Valley and will go on July 12th-14th.  Below is my schedule if you want to meet me and say hi!

Other than Meet the Pros at 10 PM, I have nothing else going on.  Meet the Pros takes place in the Hunt/Valley corridor and goes until midnight.

10 am-11 am: "The Worth of Workshops and Writing Classes" with Kelli Fitzpatrick, Jim Johnson, Derek Attico, Danielle Ackley-McPhail, and Lorraine Anderson.  Derby Room.

Unfortunately, I have to leave in the morning to catch my flight back home.  So I am not on any panels.  Will probably be busy saying goodbye to people.  :)

Hope to see some of you there!

A couple of weeks ago, something hit me.  It is, in retrospect, a fairly obvious observation.  But for me, it was an epiphany.

In case you are new to this blog, I am a caregiver to my mother-in-law, who requires a lot of hands-on care.  I am also a wife, a mother of grown sons and grandmother to the cutest little girl on the planet.

I suffer from some chronic health problems, such as depression, anxiety, and ADD.  I use a CPAP at night.  And yes, I need to lose weight.

I am also a writer who is struggling right now with getting writing things done.  There never seems to be time or energy for that part of my life.  I have been frustrated with how it is going.

Something hit me a couple of weeks ago, which made me look at things differently.  What was this surprising thought?

My life isn't going to change for me.  At least, not anytime soon.

None of that is going to do me the favor of making things easier.

If I'm going to be the writer I want to be and successful at this, I can't wait for my life to make it easier.  In fact, when you get right down to it, there is only one thing in the equation I can change.

I can change how I look at things and how I deal with them.  I can change my priorities and put the writing where it belongs.  I can stop looking at things as impossible obstacles and search for workarounds.  I can be creative.

It's time to stop waiting for things to change, and start working on the one thing I can change.  Me.

It's a little scary.  I don't know if I can change.  I'm not by nature a disciplined or organized person, and any changes will require a measure of both.

But something has to change.  Because I want to write.  I want to put my work out there for you to read.  I want to tell stories and make you laugh, cry, or think.

So, I have to change.

Life has been insane the past couple of months.  In addition to dealing with things on the home front, I attended a writing workshop at the end of February/beginning of March, read for a contest, played Magic at a tournament in Tampa, and at the moment am getting ready for the annual Lads to Leaders/Leaderettes convention in Orlando.

Along with all that, I've had two short stories published.  "Who Loves the Unloved?" appears in Fiction Rivers' Feel the Love anthology.  As the title implies, it addresses those that society may deem unlovable.  Are there people out there that care for them?

You can buy the anthology from your favorite ebook or print provider.

"A Chance to Escape" came out in a bundle called Fantasy Portals.  A frazzled full-time mom discovers a portal that promises her a wonderful life - at a price.  I've included links below.

Posted by Laura Ware at 6:28 AM No comments:

Wings of Change - Coming Out Next Month!

I enjoy dragon stories.  Dragonheart is a movie I've watched over and over again.  Stories about these creatures are ones I like to partake of.

If you, like me, enjoy such stories, next month will be your chance to get a bunch of good ones.  I'm thrilled to announce I'm in Wings of Change, an anthology of - wait for it - dragon stories.  Look for it in February, and meanwhile, check out the cool cover below: 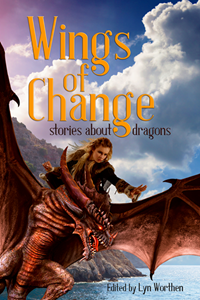 Posted by Laura Ware at 6:19 AM No comments:

Yes, I know, it's been a while.  Contrary to how it looked, I didn't die, fall off the planet, or anything quite so drastic.  I have been dealing with life, and that has taken a lot of time and energy.

Part of what I need to do is organize my time better.  This is important because a) I am a caregiver and my time isn't entirely my own, b) I work from home, and have no other boss besides me (unless you count the dogs), and c) I am not by nature an organized person.  I can have good intentions but see them vanish in a puff of smoke because I didn't plan my day.

So I am working on that.  This blog will be included in that plan.  I am not going to promise to blog a set amount - not yet, anyway.  I am pledging to blog more frequently, which may make at least SOME of you happy <grin>

If you're looking for stuff to read, I've had two short stories come out the latter half of 2018.  "The Case of the Dead Son" is a part of my Eli Leafrunner universe and can be found in Fiction River: Pulse Pounders: Countdown!  The second story, "The Devil's Muse," deals with a writer who sells his muse to the Devil, and the guy he hires to get it back.  That can be found in Fiction River: Hard Choices.  (Links are to Amazon, but you can get these anthologies wherever you buy your ebooks and such).

Posted by Laura Ware at 2:44 PM No comments: