Monday Musings: Rey and the Naysayers

Warning: this blog post will include some spoilers for "Star Wars: the Force Awakens."  If you don't want to know, you might want to skip this post.

Spoiler space for those who are curious...

Okay??  All right.  I've been reading about how some people find Rey too perfect.  The term "Mary Sue" has been bandied about.

Sexism charges have been laid against these people.  "It's because she's a girl!" these people say, dismissing the critics and going back to how awesome Rey is.

There is no question that Rey is a great character.  She's multi-talented.  She can hold her own and doesn't need to be rescued.  She's got the Force, for crying out loud!

But is she too good to be true?  Is she unrealistic as a character?

Please remember that we are talking about a character in a movie that includes faster-than-light space travel, Wookies, and the mystical Force, so it should be obvious that we aren't dealing in reality here.

Any hero (or heroine) in the Star Wars universe is going to be larger than life.  Luke Skywalker was a farm boy who could shoot a blaster as well as a Stormtrooper and a crack pilot off the bat.  No one complained that Luke was unrealistic in his abilities - at least not to the extent that people were rushing to defend him as I see many defending Rey.

I've heard the complaint that Rey is perfect.  I'm not sure I agree with that.  She has her own set of flaws and weaknesses.  When first confronted with her destiny, for example, she says "no way!" and runs off alone in the woods, WHEN THERE ARE BAD PEOPLE OUT THERE LOOKING FOR HER.  Finn had said they'd probably been tracked to the planet but she goes off by herself anyway, not telling anyone where she is going.  That certainly doesn't strike me as a perfect move.

And before Rey fans cream me, her having flaws is not a bad thing.  It makes her human.  It gives her room to grow as a character.  I'm looking forward to seeing how they explore her abilities and weaknesses in the next film.

Rey is a good fit for the Star Wars universe.  To deny that because she's a girl...well, that's silly.  And while feminists and I generally don't agree on much (which is another post for another time), this is one case I cheerfully side with them.

Okay, I am going to attempt a spoiler-free review on "Star Wars: The Force Awakens."  With that in mind, I'm going to be keeping an eye on comments to make sure none of them contain spoilers (purists might want to play it safe and not look at the comments just in case one gets by me).

So I've seen this movie twice - once in a normal theater, once in IMAX.  Both times 3-D, because, it's 3-D.  The fact I've seen it twice should give you a clue about how I feel about this movie, but just in case it doesn't, read on...

If you liked the first film that came out (and if you didn't, why would you go see this one?) you are going to love this movie.  While it doesn't quite capture the initial "Oh, wow!" of the first film, TFA manages to put together a film that is enjoyable and hearkens back to the humor and drama of the first film.

J. J. Abrams is a fan of the franchise, and it shows.  From the first scene onward, you can tell he and the people working with him love this galaxy far, far away.

The new actors work well in their roles and our old friends are good to see.  Because I managed to stay (relatively) spoiler-free there were a couple of surprises waiting for me in the film.  I liked that.

The film holds up well to a second viewing and I would not object to a third.  It's not perfect - but it's wonderful entertainment.  You definitely get your money's worth.

So, why are you still reading this?  Go see this movie!  <grin>
Posted by Laura Ware at 9:50 PM No comments:

So I got to see two new movie trailers this week - one for "Independence Day: Resurgence" and the other for "Star Trek: Beyond."

The "Independence Day" one surprised me, I didn't realize a sequel was coming out next year.  I liked the first film and still remember it though it has apparently been nearly 20 years since it came out.

I'm not sure lightning can strike twice in this case, and the movie is hurt by the fact that Will Smith will not be in the sequel (I've heard 2 different reasons for that).  But a number of the original cast came back for this one so I'm curious to see how it goes.

Then there is the "Star Trek" trailer.  I am a fan of the Trek universe, and probably don't hate the reboot as much as others seem to.  But as to the trailer...
Hmm...there may be a spoiler here so if you just don't want to know, this would be a good time to quit reading.  I'll add some space...

Okay, why are we destroying the Enterprise?  In the third film?  Just like the original movies?
Yes, it looks impressive, but...WHY?

In spite of that there were some fun moments in the trailer that give me hope the film will actually be enjoyable.  It also comes out next year.

Anyway, are there any films you are looking forward to?  Let me know!
Posted by Laura Ware at 11:34 PM No comments:

Monday Musings: The Problem of a Blank Mind

Here it is, time for me to post something for you to read on Monday, because I want to blog every week...and I got nothing.

It's probably due in a large part to fatigue.  It's certainly not that I've been in stasis for a week - a lot has happened, both to me personally and to our nation as a whole.

But somehow I can't bring together coherent thoughts about it.  At least not at the moment.

Writers have this happen sometimes.  We're supposed to create something but when we consult that portion of our brain, it's a blank slate.  All the brilliant ideas we had up to that point while lying in bed or eating breakfast?  They've gone into hiding for some strange reason.

What do you do in a situation like that?  When the muse has gone AWOL and you're staring at a sea of white on your computer screen that you're supposed to fill with little black marks?

You write the next sentence.  And the one after that.  And...well, you get the idea.

Sometimes it's a struggle.  Sometimes you have to change things up, toss in something new to shake up the story and get the juices flowing again.

But you keep writing the next sentence.  And the next.  Because you're a writer.  And that's what you do.  It may come down to one WORD at a time, but you keep on keeping on.

Either that or quit and become a professional video game player. <grin>
Posted by Laura Ware at 11:19 PM No comments:

Tuesday Thoughts: The Conclusion of Nano and a New Book Out!

Yes, this should be Monday Musings, but by the time I finished writing I was exhausted.  And it completely slipped my mind.  So please forgive me for being late.

I finished up this year's Nanowrimo at 25,074 words.  While it's only half of the 50k I was aiming for, it is my best month this year and better than I did last in last year's Nano.  So I'm calling this a win on my side.

On the plus side as well I am working on a novel that has fired my interest, even if I'm at the stage where it all seems like garbage (every novel hits this stage when you write, you just push through it) and I hope to finish this one by early next year.

Speaking of novels, I have a new one out.  TWO WEEKS IN GUYANA is available as an ebook in all the usual spots and should be available as a print book shortly.  I hope you enjoy it! 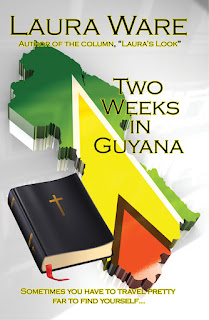 Posted by Laura Ware at 7:51 AM No comments: